Five Levels of Communication For an Effective Driver Coaching Session

The path to creating a culture of safety and effecting lasting positive behavioral change in your fleet driver population, one that assures they take full responsibility for risky behaviors behind the wheel, is to put the driver at the center of the process—not the data. So, where do you start? How do you get there? And where does data fit in?

This coaching communication process, with each subsequent step, moves drivers closer toward becoming more aware of their own driving decisions, drawing objective conclusions about their performance, taking ownership of the outcome and wanting to make positive, long-term changes behind-the-wheel. 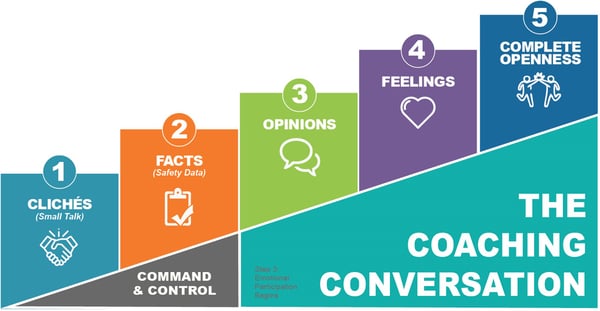 At this level, the safety manager initiates the conversation, and the discussion remains superficial. This is the small talk stage, where nothing too personal is revealed. However, it is an important because it helps to break the ice, put people at ease, set expectations and introduces the reason for the coaching session. Through non-judgmental communication tactics, the coach presents the incident under review. In the example below the conversation centers around a speeding infraction.

Coach: “Hi Charlie, have a seat, how are you today? We’re here to talk about your safety behind the wheel.”

Driver: “Hi Boss, couldn’t be better, and you?”

Coach: “I’m doing well. Let’s jump into this traffic infraction and talk about what happened, ok?”

After the initial introduction to the problem, the manager then continues to seek out more information about the circumstances surrounding the incident and why it may have occurred.

LEVEL 2: Getting the Facts, Nothing but the Facts

This phase introduces more specific factual details about the incident. During this discussion, the driver explains the situation and provides facts based on his account of what happened. After obtaining the driver’s side of the story and compiling all the details, the coach can compare the information with available data from telematics or MVR reports, to ensure the facts are consistent. Before moving forward, it is important to repeat and validate the details with the driver to assure that there was no miscommunication based on what was shared. Once confirmation is received, now more open-ended questions can be asked based on the facts which enables the driver to further explain and examine his decisions.

"Before moving forward, it is important to repeat and validate the details with the driver to assure that there was no miscommunication based on what was shared."

The first two levels when grouped together by themselves represent what can be described as “command and control” approach to communication. In organizations which don’t communicate past level two, a manager meets with the driver—or worse sends an automated email, produces facts to evidence the bad behavior, then prescribes a remedial action. However, for fleet operators who want to bring the conversation quite literally to the next level, these first two steps help set a foundation on which to build upon. Once you navigate through levels one and two, that’s where true coaching begins to take place.

LEVEL 3: Moving Past Opinions and Perceptions

Here the conversation shifts to ultimately identifying the underlying issue for the driver’s safety infraction. By asking a series of probing and open-ended questions using conversation prompters such as “What else?, “Which means?”, “In what way?”, “And?” the safety coach guides the driver to critically think about the situation. Here’s an example of how that conversation could get started. Keep in mind the it may take several rounds of prompting before getting to the “real” answers.

Coach: “Let’s discuss the ticket. Do you have any idea why you missed the speed limit sign?”

Driver: I don’t know. It’s the first ticket I got in a while.”

Driver: “I had a slip-up. I’m really upset about it”

Driver: “It reflects my driving capabilities and concerns me that I’m not paying attention. Now that I think about it, I was talking to the crew in the truck right before I got pulled over.”

During this phase the driver shares that he was engaged in a conversation with his passengers and missed the speed limit sign. The coach can see from the information in the MVR report, that this isn’t the first time that the driver was stopped for speeding. This recognition is a great step toward addressing the potential underlying behavioral issue, which could be caused by both time management and distracted driving issues.

This level of communication is the ground-breaking moment in which the driver describes how he is feeling about the incident, which in this case, is being stopped for speeding because he did not pay attention to the speed limit sign. It’s also the most difficult phase because sharing feelings involves more risk than sharing ideas because emotions are more intimate. In this scenario, the driver has finally reached a point where he has established trust and is open to share that he’s afraid that if he does not pay close attention to traffic signs and signals, he’ll put himself and his passengers in danger and perhaps end up in a situation where he is unable to provide for his family. At this phase of the discussion, the driver has taken a deeper look into the incident and is comfortable expressing his feelings. Connecting feelings to an unsafe driving scenario is crucial because most of the time, change in behavior stems from an emotional response.

The final level is where an authentic and deep relationship is built between the safety coach and the driver and is considered the most intimate level of communication. At this point of the coaching process, the driver understands the importance of always behaving in a safe manner behind the wheel and has been able to come to his own conclusion about what adjustments need to be made. Also, this is the point where the driver becomes motivated to initiate his own personal plan of action because he’s now fully aware of what could happen if he repeats these unsafe driving behaviors.

"At this point of the coaching process, the driver understands the importance of always behaving in a safe manner behind the wheel and has been able to come to his own conclusion about what adjustments need to be made."

Implementing a coaching process which exhibits a five-level communication session, where both parties collaborate on shared goals and collectively contribute to achieve increased performance levels while still making use of data, guides the driver to address his or her own, personal underlying behaviors without feeling defensive and becoming uncommunicative. When communication barriers are broken down through this balanced approach between people and data, coaches are able to provide more in-tuned coaching efforts which puts drivers in the best position to keep themselves safe behind the wheel.

What Are the Root Causes of Distracted Driving?